skip to main | skip to sidebar

A Weekend of Eating: Part Two

My dad somehow has got it into his head that Brooklyn is filled with mobsters. I mean, I guess it used to be in the 80s--which was the last time he was here. Apart from an incident involving him saying "Bada Bing" over and over in a cab and, I think, almost getting shot by the cabbie who menacingly kept asking him to repeat it, with which he complied jovially now matter how many times my mom and I told him to shut up, these illusions of me living in mobster-ville are fine. The point is, he was really intent on eating some Italian food while in WASPy Brooklyn.

I was happy to comply, since one of my favorite restaurants in New York just happens to be Italian and within "tourist walking distance" from my house (i.e. two blocks). Convivium Osteria is a weird little place on Fifth Ave. in North Slope. The front windows have a bunch of crap in them (wine barrels, wooden somethings, fake plants) so you can't really see in. While at first I was mystified by this, I get it now. Going to Convivium Osteria is like leaving Park Slope Brooklyn completely and entering some sort of Pan-Mediterranean paradise, and you really wouldn't want to spoil that by seeing some Park Slope mom roll by in Yoga pants. 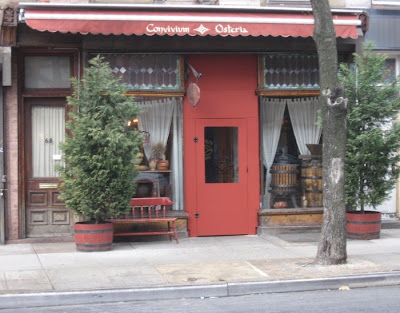 Crap in the windows

First off, the host will speak Italian to you, whether you understand it or not. The waiter will joke with you in Portuguese, whether you understand it or not. Luckily, I have a vague grasp of both of these languages, but, even if you don't, you'll be fine. Just pretend they're saying whatever a waiter speaking in English would at that time in service.

There are three separate rooms in Convivium: the one by the door, the back room which is like a barn or something, and the wine cellar. The only room I don't like is the one by the door. But that's a thing I have. I've sat in the back before, and it was really cool--very rustic. However, we have a barn at home that my parents can go sit in whenever, so I figured the wine cellar was best. 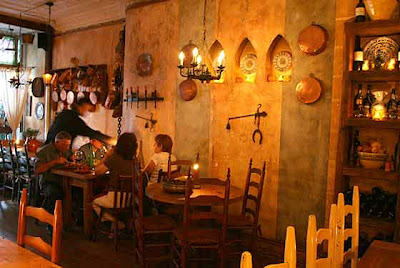 Anyway, the food at this place is ridiculous. For an appetizer we had a huge pot of clams (cherry stone according to my mother) with chorizo (a family favorite). The broth was pleasantly spicy, and very buttery (I suspect) and supremely delicious. We were sad that we had acted like idiot Americans and eaten all our damn bread so we didn't have anything with which to sop up that glorious broth (in our defense, the olive oil was really good). 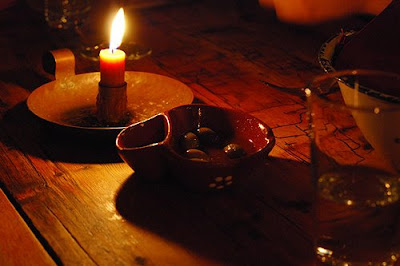 For wine we had a Spanish Rioja that was around $37, I think. Basically, mom said "let's get a Rioja" and I said "ok" and the waiter just brought whatever with nothing more than an "I will get you wine." And then he laughed at my dad because he obviously had no choice in the matter. This is a great place if you are clueless with wine or even good with it, but trusting: just order your mains or whatever and tell the waiter you don't know what to get. With the endearing brusqueness of Europeans, they will just bring you something. And it will rule.

For said mains, I had Braised rabbit with prosciutto, olives and capers over polenta triangles (I'd never had rabbit before), my mother had Braised Berkshire pork baby back ribs with polenta (she's never had polenta before! what to they eat up in the great white north?), and dad had braised duck leg with black cherries over potatoes (they're big on braising here, and so am I). Sounds great, right? They were. 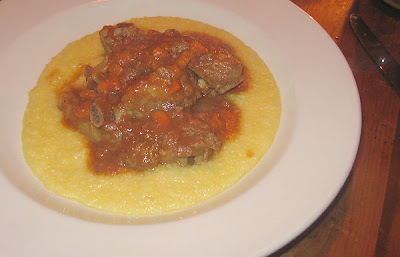 For dessert we had flourless chocolate cake (gooey and so good) but the real stars were the dessert wines. Yet again we just asked for dessert wines and they came back with something great. I had a port of some kind that was wonderfully full of stone fruits, and mom had...well...she went nuts over this: a 1927 dessert wine that seriously tasted so richly of raisins I couldn't believe there were any grapes in it. She (a raving raisin fanatic, apparently) kept the bottle (not that she drank the whole thing, just that her glass happened to be the last one out of it) after asking, of course. Dad just chilled out, extremely happy with the Rioja that he had no hand in picking.

We left happy and full, and I really cannot recommend this restaurant more. I know it looks weird and stodgy from the outside, but it honestly provides one of the best experiences I have had dining in NYC. Seriously.
Posted by Meghan at 8:30 AM No comments:

A Weekend of Eating: Part One

My parents were in town to visit me this weekend, and, since they certainly contributed to my passion for eating and drinking, I thought I would share some of what we had.

They rolled in at about 12:30 on Saturday afternoon after driving down from Massachusetts. Immediately, they asked me "what do you got?"--family code for "surrender your booze." Anyway, by 1:30 we had polished off a bottle of chardonnay that I just happened to have chilling in the fridge (and thank goodness--I was otherwise out of anything to drink except vermouth and tap water).

Our first meal was at this cute French place called Le Gamin in Prospect Heights--we settled on this after being turned away from a few other lunch spots on Vanderbuilt that were too busy. Now that I look at the website, it looks like there are three locations of this thing. They must be doing something right! Anyway, we had to wait a bit, as is to be expected on a Saturday afternoon, but not too long. We had a bottle of Muscadet that we all enjoyed (wines were the miracle of the weekend since we usually vehemently disagree on them, but we kept getting lucky). I had a tuna sandwich on baguette which was nothing to go crazy over, but the baguette was pleasantly sweet and was perfectly crusty. My mom had eggs Le Gamin, which was eggs in ratatouille over a shredded potato cake. She liked the ratatouille, but was disappointed with how dry the potato thing was. On a more enthusiastic note, my dad had Croque Madame....and damn, it was amazing. The bread was Texas toast sized and very soft, the ham was perfectly salty, and instead of putting the egg inside the sandwich, as I have usually seen it, the fried egg was on top of the sandwich over a bonus slice of cheese. This made the whole thing ooey gooey and wonderful when you cut into the still runny yolk. All in all, the waiters, etc. were all very friendly and the food was solidy good. I had never been to this place before, but certainly took note of it as a place to recommend to friends. 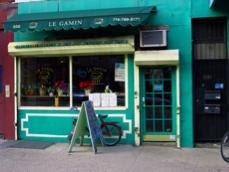 My short attention span is making the task of writing all this out at once, so stay tuned for more eating, drinking and swearing with the parents.
Posted by Meghan at 2:34 PM No comments:

Let's be serious, people, St. Patrick's Day is pretty horrendous. I had sort of forgotten how bad it really is since I have spent almost all of my Paddy's Days either at home or in Ireland--where at least the drunken idiots are Irish.

The reason I usually go home is because my father's birthday is the day before St. Patrick's. His birthday occurs on this day because my grandmother drove to the hospital and demanded induced labor on March 16th because she was afraid that if she had her child on March 17th she would be forced by the Pope or Michael Collins or someone to name her child Patrick. Apparently, she hates the name Patrick. Enough to have induced labor. Yes, everyone in my family is crazy.

Anyway! So I had the utter joy this year of spending Paddy's Day in New York. Luckily, for most of the day I was hidden away in my office with no window. However, around seven o'clock a friend of mine and I decided to see if we could somehow defy logic and have a few drinks in a moderately crowded bar to celebrate her not having to go to Jury Duty that day. Long story short, everywhere was awful and crowded with Irish Americans celebrating whatever scrap of their DNA is Irish and wearing weird hats and left over Mardi Gras beads. We did find a place that was I guess vaguely Irish and had a table or two open, and I sat down to have two (bad, watery) Guinnesses and (here's where we get to the food part) a tuna wrap (also bad).

A Tuna Wrap?! On Paddy's Day? Yes. The truth is, and I know this is a shocker: Irish food is bad. Irish food is bad in America, and even worse in Ireland (well, except for full Irish Breakfast--delicious). And some of the stuff isn't even Irish:

Exhibit One and Only that I can think of off the top of my head: Every year, at some point, I get a lecture from my dad about how corned beef isn't Irish, and as far as I know he's right: the only place I know of that they serve it in Ireland is in Temple Bar in Dublin (tourist trap hell) and probably in some terrible place next to the Blarney Stone. Corned beef is, at best, Irish American. As in, when the Irish came to America, lived in slums and didn't have fridges, they ate corned beef because it was cheap. Newsflash, most people have electricity now. We don't have to eat that kind of thing anymore.

From my experience, on Paddy's Day, the tradition Irish meal is either fried chicken or lamb shawarma, or bad pizza, or nothing (Guinness is pretty filling...and it reminds us of how our ancestors starved in the famine--zing!)

Now, if you want to be genteel about it, Ireland really does have some wonderful food (see Anthony Bourdain's Ireland episode) and to celebrate you could have a salmon fillet, or a rack of lamb (lamb tastes way better in Ireland, btw. If you think you don't like it...try a grass-fed guy) as my grandmother recommends. Along with the traditional Manhattan cocktail taken directly after church. It is a religious holiday, you know.
Posted by Meghan at 10:49 AM No comments: